Come away with us on a magic walk through amazing rooms of Buenos Aires. Argentinian video artist Sebastian Diaz Morales has a man walk through a building that both exists and doesn’t exist, in his Jorge Louis Borges inspired video ‘Pasajes’. Read more …

Diaz Morales takes us through a maze of Buenos Aires, attempting to break on through to the other side by manipulating elements of reality: “I understand reality as a construction which we can deconstruct.”

Morales explains that he is using film to cut reality, taking aspects of it and using it to create a passage to other things. By opening doors and entering into new places which are not connected in real life, Diaz Morales is shaping an imaginary, literary connection and an alternative geography: “A map which is not the usual map.” In this way he is making a different map of reality, regenerating the body of a city and its images.

Sebastian Diaz Morales (b. 1975) is an Argentine visual artist, who belongs to a new generation of Latin American artists. His work has been exhibited widely at many prominent venues, such as the Tate Modern, Centre Pompidou, Bienale Sao Pablo and the Sydney Biennale. In 2009 he was awarded a Guggenheim Fellowship.

Sebastian Diaz Morales was interviewed at his studio in Amsterdam by Christian Lund. 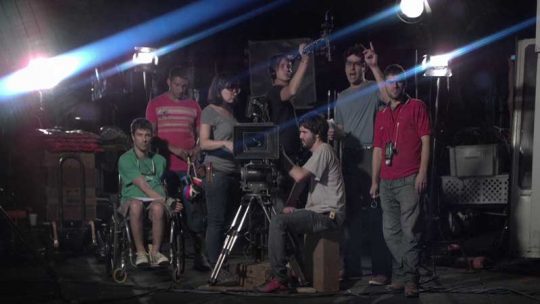