Gerhard Richter: In Art We Find Beauty and Comfort

“I don’t really believe art has power. But it does have value. Those who take an interest in it find solace in art. It gives them huge comfort.” Gerhard Richter, one of the greatest painters of our time, discusses beauty in the era of the internet.
Read more …

“These days, beauty is not in fashion,” says Richter, who has explored painting and its role in image culture for decades on his quest for a form of painting that corresponds to contemporary challenges. Quoting German author Thomas Mann, who predicted a change in art, Richter says: “Art will shed all of its gravity and transform into something merry and democratic.” But art has, in Richter’s view, surpassed even that. “It’s now more than merry. There has never been so much art … We don’t need it. We need entertainment. Sensations.” Beauty, however, is not lost for the artist: “Beauty is an ideal of mine as much as it ever was … But beauty is being discredited when fashion and models are called beautiful.”

Boasting a diverse catalogue of paintings, Richter has always been suspicious of staying with the same motive and painterly strategy: “It’s more interesting to be insecure. You should have a measure of uncertainty and perplexity.” The Louisiana Museum of Modern Art recently acquired one of Richter’s 10 metre stripe-paintings, supplementing it’s collection of works by, and long standing relationship with, a painter who is considered the most important of the post-war era. As an incessant voice in contemporary German painting for more than half a century, he has witnessed the development of his country since World War II and in this light his resume of the state of affairs of his native country seems uplifting: “Actually we have the same or similar problems as all other countries nowadays… we’re looking ahead.”

Gerhard Richter (b. 1932) was a professor at the Düsseldorf Art Academy from 1971-1994 and is the recipient of numerous prizes, among other the Golden Lion at the 47th Venice Biennale in 1997 and the 1998 Premium Imperial Prize. His paintings have been shown extensively, e.g. at the Tate Galleries, London, UK and at The Museum of Modern Art in New York, USA and his work is held in major collections around the world.

Gerhardt Richter was interviewed by Anders Kold at his studio in Cologne, Germany, in September 2016. 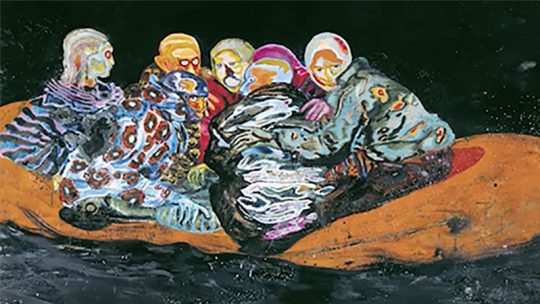